It is officially November – which is weird, because it feels like it was September yesterday – and with the fall come a few important days to remember.

Wyvern, being a story centred around a boy who would likely identify himself as transgender, is a book hoping to fill a void that very much needs to be filled. This month we are taking the time to recognize that void by marking November 20th as Transgender Day of Remembrance.

For those folks who may not have as much experience with or knowledge of the trans community, it is important to know that the struggle for recognition, advancement and acceptance is very different for transgender folks than it is for the rest of the GLB rainbow. North America is rapidly becoming a place where seeing a gay couple has a certain air of normalcy around it, which is fantastic. However, we still run into controversy when we discuss the rights and treatment of trans people, for reasons that I admit are not entirely clear to me.

I’d like to call on all of us to recognize the importance of learning more about transgender realities, especially this month, as we approach a day to commemorate the losses of trans individuals – often young people – who have taken their own lives, or who continue to struggle or suffer.

As such, I want to take a moment and add to our pool of notable trans talent. Have a look at this: 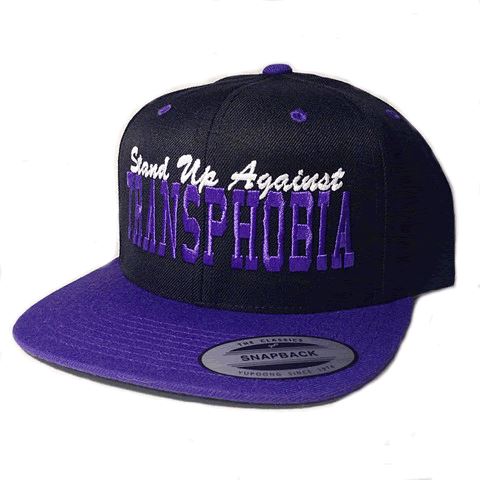 Stand Up Against Transphobia (oops, I linked it again) is a community group run by a super cool Niagara man named Michael Sherman, who has made it his mission in life to raise awareness on transgender realities, and has shared his story with hundreds of people. He’s now selling these hats at $20 a pop, and I figure, if you’re going to stand up for a good cause, you should do so looking stylish!

Proceeds from the sales of this wicked merchandise are donated to organizations that assist the transgender community, so this is a worthy cause indeed. Have a look. And whether or not you’re wearing a spiffy hat, take some time and recognize the road trans folks have travelled, and the long one still left to walk.